The whole day passed by without my getting to this, and now I'm in bed writing before I return to some of the various books I'm working on. We'll see how this goes, though I do have the benefit of a couple notes I took yesterday and early this morning.

Watched Kieslowski's The Double Life of Veronique yesterday. It's been many years since I watched it, but I've always retained a positive memory of all the films of his I've watched. It's an unusual film, but one that feels very 90's euro art film to me, though I can't back that up with anything specific. It's story is one that makes me wonder where Kieslowski and his writing partner Krzysztof Piesiewicz got the idea from. The film starts with Weronika, a young Polish woman with a lovely singing voice. At one point she sees someone who looks exactly like her taking photos of a protest and getting into a tour bus. At one point in the movie Weronika dies and then the movie transitions over to showing that other identical woman, Veronique, a young French music teacher. The film follows her and an odd set-up for a romance that starts. Towards the end, her new boyfriend, in looking at the contact sheet of her photos from a trip to Poland, notices Weronika.

I think if I watched it again I would notice more connections between the two women, it feels like there should be overlapping narrative or symbolic elements. There are some just in regards to music, but overall the story doesn't do anything really explicit to parallel the two women. There's no cutting back and forth between them, for instance, or any indications that they are secretly related or twins or anything like that. But there are moments where there seems to be a connection. The latter mentions a moment where she suddenly feels like she is alone in the world, clearly referencing the death of the former. But the connection remains a mystery, the fact of the existence of two identical women is left unexplained.

Some movies are heavily dependent on the lead actor, and this is certainly one of those, Irene Jacob carries the movie with her presence. She is in every scene, the focalization never leaves Weronika/Veronique, though we do very rarely see things that they miss (late in the movie, Veronique is in a train station, and one of the women from the first part of the movie clearly sees her and is surprised to see a women who looks just the dead singer, but nothing comes of it, it's just in the background). Irene Jacob is really powerful in this, and it's weird to me that the only other thing I can think of with her is Kieslowski's Red (which I also mean to rewatch).

Two times in the movie (once for each of the women) she looks right at the camera, in a surprising way, especially for a film that is otherwise firmly behind the fourth wall. The lighting in the movie seemed really green to me, I'm not sure if that's a result of lighting or film stock, but it had to be intentional. It suffused the film in an odd way, that I can't quite explain, but it was beautiful. One scene beautifully contrasted that green light with a red one. 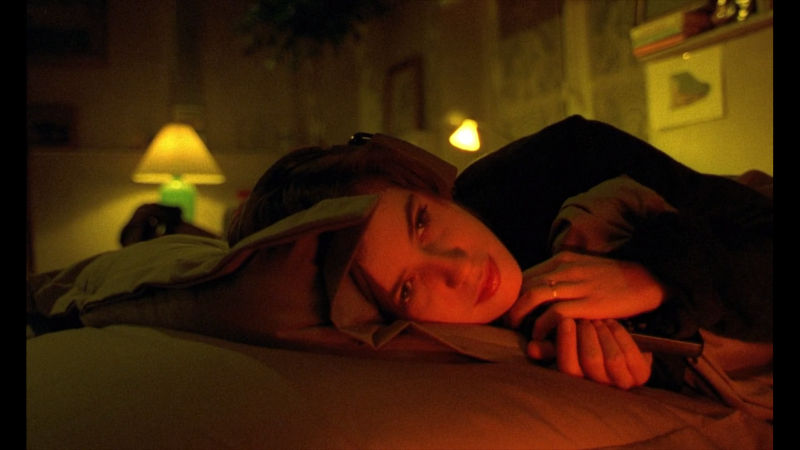 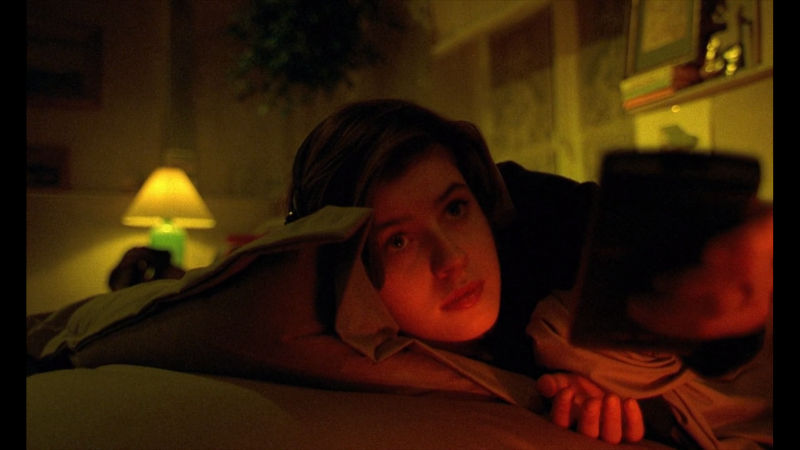 Seems like a movie I should rewatch before I forget too much of it, as I expect there's more to be seen in it, than I got out of a single viewing.

I mentioned the Brad Warner book I'm reading the other day, and there were two quotes I wanted to copy down. In one chapter he's talking about the idea of "no self" in Zen.

But we can say that our personality is not our self. Our feelings are not our self. Our experiences are not our self. This can go on and on. So finally Buddhists just gave up and say there is no self. It doesn't mean all that other stuff doesn't exist. But the idea that all these things &em; all these "heaps" or "aggregates" as the ancient Buddhists call them &em; are one single integrated thing that is the real "me" starts to seem absurd. You might as well just give up the idea. (110)

I think how sometimes, I try to be consistent to my "self". How I can define myself by things I like or things I do or ways I act, and then to go against those things or give up those things or just be contradictory, is really hard. It's like once you have this idea of yourself you have to hold onto it, and it can be hard to change it. Your self becomes this habit that you perform without thinking every day, and sometimes you think you want to change part of the habit, but then that would be... not your self.

It's like the idea of changing your mind. Changing your mind can be "flip flopping" or hypocritical or just plain inconsistent for other people. If I spent years liking... trying to think of a real example right now and failing, so falling back on a hypothetical... black tea and then decide, no, I don't want to drink that anymore, but everyone I know keeps offering me tea, or making it for me. And I'm not sure any of this completes a thought, but it triggered something in my head reading it (and probably it's more clear and evocative in context of the rest of the chapter).

The other quote, in a chapter about the 10 precepts of Buddhism, talks about one "Don't get mad."

I feel like you can divide anger into two phases. The first phase of anger comes on suddenly in response to a situation. It happens so fast there's not much you can do about it. Maybe something triggers you in some way. Maybe it's almost a physiological reaction to a situation. In any case, it's hard to avoid. The second phase of anger is when you take that initial burst and hold on to it. You make it into a part of your self-image. I am angry. _My_anger belongs to me. You hold grudges. You plot revenge. You hate. It can get ugly. (138)

Brad talks about this in some of his other books, so it wasn't a new idea to come to, but it's one that has stuck with me and that I've tried to take to heart. I do get angry, especially when I'm stressed, especially when a bunch of little things build up. And I can feel that desire to hold on to the emotion, to be the emotion. I'm angry so I should keep being angry and yell or bang on things or stomp about. So, I've been trying to understand that, and to let it go. To feel the emotion: "I'm angry, I'm frustrated, I'm stressed." To own up to it, but then to not grab onto it nourish it and work it over in my mind and think about how I'm angry and what made me angry. None of that helps.